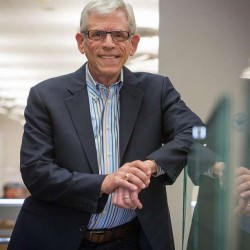 Twenty-five years ago, a San Francisco Public Library commissioner named Steve Coulter came up with an idea that was so far ahead of its time that he was afraid to let it out of the house. So he invited six friends over to try it out in the safety of his living room.

The radical notion was to establish “an archive that would actively seek out the history of gays and lesbians before it is all lost,” recalls Coulter, who was not yet thinking as big as his idea would become. But when the James C. Hormel Gay & Lesbian Center opened in the New Main Library five years later, on April 18, 1996, it was the first permanent gay and lesbian center in any municipal building in America.

“This was unheard of at the time,” says state Sen. Mark Leno, D-San Francisco. “The fact of it in the public library communicated to the LGBT community that we were now officially part of the civic fabric of San Francisco.”

Read the rest of the article here:
https://www.sfchronicle.com/lgbt/article/Nation-s-first-gay-public-library-center-turns-8255564.php

Want to join the discussion?
Feel free to contribute!

Inspiration  for Spartak
Scroll to top