Steve writes speculative fiction. He explores issues of consequence embedded in fast-paced adventure, exotic settings, nasty bad guys, reluctant heroes, and the audacity of love. His work is enriched by his varied careers – soldier, teacher, journalist, state legislator, corporate executive and library commissioner. He has a BA and MA in Journalism and was a Lambda Literary Fellow in 2008 and 2013, later spending two years on the Board. He lives in San Francisco with his husband, Greg. They favor bittersweet chocolate.

High school in a small town

For the author, high school in a 1960s small town was a discombobulating experience when you knew you were different. Gay wasn’t even a term used much outside New York and a few brave publications. When discussed at all, in hushed tones, it was sometimes homosexual or pervert. Media rarely covered the topic unless it was an expose. And library books listed it under mental disorders. Who could admit to being one of those ghastly things? So high school (and politics) is novelist utopia, back then, today and in the next century. Just ask Spartak, Abel Torres and their friends.

Steve spent twenty years helping rebuild the San Francisco Public Library system. Much of the time he was President of the Library Commission, appointed by Mayor Art Agnos (and reappointed by the next three mayors), planning and constructing the New Main Library and beginning the renovation of all 27 branches.

The New Main in Civic Center is built on the ruins of the old City Hall destroyed in the 1906 earthquake. Parts of the 19th century jail were found during excavation. Steve is probably best known for his role in helping a fabulous group of activists create the James C. Hormel LGBTQ Center, a national intellectual resource, archiving Q history, achievement and pride. It is a place where young people, questioning their sexuality, can find honest answers. 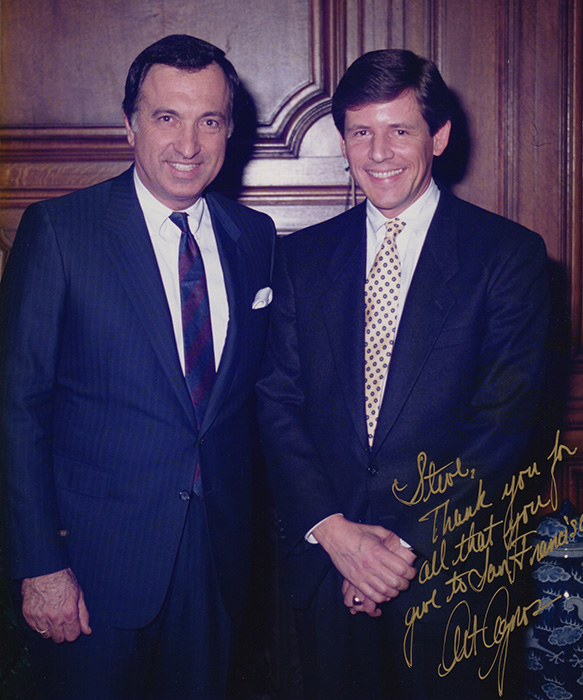 Mayor Agnos makes his appointment in 1988